How To Tie A Trucker’s Hitch

The Trucker’s Hitch (also called the Lorry Knot) is a self binding knot. It’s most common use is for tying loads to secure them to a fixed point. For example to secure a canoe to a car top, a tarp to a trailer, or any application where a very tight rope is needed.

This knot has many advantages. It is non-jamming, can be tied anywhere in the standing part of a line, and even under the most severe tension, these knots remain easy to untie.

The Trucker’s Hitch is a knot that should be in every outdoorsman’s arsenal, whether you prefer the classic version or a modified variant. It will serve you in countless ways.

How To Tie The Trucker’s Hitch

This knot has many steps and might seem overwhelming at first. The goal is to provide several “layers” of reinforcement so that the load stays secure on your truck.

1. Arrange The Cord In a Backwards S Above Your Connector

Lay your cord out on a flat surface so that it forms a backwards letter S. Arrange the item to which you will be connecting the knot (such as a hook, trailer hitch, carabiner, or other object) below the cord.

2. Add Another Loop To The S

Pull the tail at the top of the S so that it doubles back toward the main part of the “letter”. Create another loop and let the tail hang up above the whole thing.

3. Arrange The Right Cord On Top

Move the right side of the S so that it lays down the center of the knot, making two parallel lines in the middle. There should be a loop on either side.

4. Pull Both Loops To The Right

Pull the loop on the left across the center so that both loops lay to the right of the central lines.

5. Pull To Close The Top Loop

Holding the bottom loop to anchor it, pull from the top to tighten the upper loop.

6. Guide The Cord Through The Connector

7. Pull The Cord Down And To The Left

Pull the tail down so that it hangs alongside the connector. You will change this momentarily, but make sure to do it before moving on to the next step.

8. Pull The Tail To The Right

Move the tail behind the lower loop in the cord, letting it hang to the right of the entire structure.

9. Pull The End Through The Loop

Guide the tail back through the bottom loop to the left. At this point, you are simply weaving the end through multiple times to reinforce the knot’s security.

10. Pull The Tail Back Through The Bottom Loop To Complete The Knot

Pull the tail to tighten, then thread it one last time through the bottom loop to complete the knot.

You can get all kinds of lengths of 550 lb paracord at Amazon to practice this knot or for use tying the trucker’s hitch.

Tips on Tying The Trucker’s Hitch

To complete a Trucker’s Hitch, make sure to pull it tight from the working end. This adds extra security through a mechanical advantage of 2:1. You may also want to learn variations that complete the knot with a taut line hitch or double half hitch, both of which decrease the risk of slipping.

Variations On The Trucker’s Hitch

The Trucker’s Hitch has many variations. These use the same basic construction but vary midline loops or other elements to add extra security or reduce slippage or jamming.

Advantages Of The Trucker’s Hitch

One of the biggest advantages of the Trucker’s Hitch is that it can bear a lot of weight thanks to its extremely secure construction. This knot is not prone to slipping but can still be untied easily. It is also simple to pull tight.

Disadvantages Of The Trucker’s Hitch

The main disadvantage of the Trucker’s Hitch is that it can cause wear and tear if used repeatedly on the same cord or rope. Similarly, if you pull it too tightly while securing tarps, you may rip the material.

History Of The Trucker’s Hitch

Ironically, despite the knot’s name, the Trucker’s Hitch predates the invention of the automobile. It was originally used by hawkers who carted their wares on horse-drawn carts. They used variations of the Trucker’s Hitch to secure their carts for transport. The knot has remained a reliable choice for securing loads during transportation, eventually becoming associated with trucking.

Uses For The Trucker’s Hitch

Although the knot gets its name from its use in trucking, there are many uses for the Trucker’s Hitch. You’ll find this knot and its variations used everywhere from boating to camping. It is a versatile knot used as a general anchoring knot for loads.

The Trucker’s Hitch can be used to create an anchor for climbing. This can be extremely useful if you ever need to haul a load or even a person up an incline, especially as you can substitute any anchoring device — such as a tree — for a hook or carabiner.

The Trucker’s Hitch is not widely used in fishing.

The Trucker’s Hitch is not specified for use in hunting. However, it is so versatile and practical that you may be able to find a use for it in this capacity.

You can use the Truckers Hitch to secure hammocks to trees. Alternatively, it is widely used to tie the ridgelines on tarps, which has uses in both camping and trucking.

The Trucker’s Hitch is related to the Prusik knot, the Sheepshank, the Slipped Half Hitch, and the Versatackle knot.

To Tie a Simple Trucker’s Hitch: 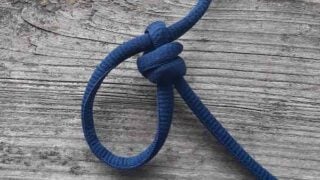