How to Tie the Haywire Twist

I don’t personally use the haywire twist for fishing often.

But, if you frequently go after very big saltwater fish, including sharks, then it’s certainly a very important fishing knot to know how to tie.

The haywire twist is specifically designed for use with wire leaders like those typically used when saltwater fishing for bluefish, marlin, tuna, and similarly large species.

Among saltwater anglers, the haywire twist is widely regarded as the absolute strongest way to attach a single strand wire leader to a hook, lure, or swivel.

Today, I’m going to break down exactly how to tie a haywire twist for offshore sport fishing.

How to Tie a Haywire Twist

The haywire twist is almost always used to attach a single strand wire leader to a hook, lure, or swivel. But, to make our instructions clearer, I’ll use something a little larger in diameter.

Start by passing the wire line through the eye of the fishing hook. Bend the wire and bring it back up so its parallel with the standing line. Leave 4 to 6 inches on the tag end.

Now, wrap the tag end of the wire an equal number of times around the standing end.

Finally, move the tag end of the wire up and down until the excess breaks off. Don’t cut the wire with pliers as this will create a sharp burr.

Tips on Tying the Haywire Twist

Understand that the haywire twist is far from the quickest fishing knot to tie.

That said, it’s a reasonably easy knot to learn if you work through each step slowly your first few times tying it.

Perhaps most important is to take your time when completing step 1.

It’s important to create a smooth bend in the wire where it goes through the hook eye. You don’t want any kinks in the wire. A rounded 90-degree angle is essential.

Just as important is to make sure that you’re actually twisting the wires around each other during step 2. You don’t want to twist one wire around the other until you get to step 3.

Because of the stiffness of wire, twisting the two lengths around each other (rather than one around the other) can be a little bit difficult to master at first.

There are several tools available that claim to make tying the haywire twist easier. An example is the DuBro Fishing Haywire Twist Tool.

Although haywire twist tools are certainly useful, you can accomplish pretty much the same thing with a simple pair of pliers.

Honestly though, I don’t recommend a haywire twist tool or pliers for most anglers. You’ll be able to quickly learn how to tie the haywire twist by hand after a little experimentation.

Tying the haywire twist can certainly be a bit rough on the hands, but using a tool is much more likely to lead to kinks and nicks which will sacrifice the strength of the wire.

Best Uses for the Haywire Twist

The main use of the haywire twist is for big game fishing.

This unique fishing knot doesn’t have many additional uses outside of attaching a wire leader to a hook, swivel, or lure.

That said, the haywire twist is widely regarded as the strongest way to join a wire line to terminal tackle.

The haywire twist is well worth learning if you’re a fan of offshore sportfishing, although its applications are limited otherwise.

Pros and Cons of the Haywire Twist

Like any fishing knot, the haywire twist has its advantages and disadvantages.

Here are the main benefits of the haywire twist:

Here are the main drawbacks of the haywire twist:

History of the Haywire Twist

The haywire twist has gone through several different iterations as a fishing knot.

In fact, the modern haywire twist is a completely different beast than its predecessor.

Or, rather, the knot was incorrectly identified when it was first published in a book. Since then, this mistake has been repeated in each new book (and, now, on the Internet).

The mistake has been repeated so many times now that the original haywire twist is seemingly lost to time.

The fishing knot we know today as the haywire twist is actually the mistaken knot – but it’s still proven one of the best fishing knots for big game fishing, including sharks.

The haywire twist, in its current form, has been around since about 1972, at least in terms of published media.

Variations of the Haywire Twist

I’m not familiar with any variations of the haywire twist, at least as far as using wire line for fishing goes.

That said, you can change up the number of twists and wraps while tying the original haywire twist.

About four to five twists and wraps is standard for saltwater fishing.

However, you can add a couple extra without any ill effects (although, you likely won’t increase the knot strength either).

Every angler going after big fish or sharks needs to know the haywire twist.

As mentioned several times already, it’s perhaps the single strongest way to connect a wire leader to a hook, lure, or swivel.

Want to learn to tie even more fishing knots?

Our guide to the best knots for fishing and our complete knot list are great places to start! 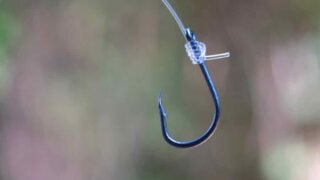 ← Previous
How to Tie the Snell Knot 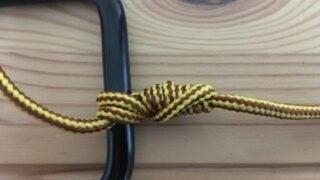 Next →
How to Tie the Trilene Knot