How To Tie A Cow Hitch

The Cow Hitch – also known as the Lanyard Hitch, the Lark’s Head, or (in an occasionally used perversion of the latter) the Lark’s Foot – is a go-to construction for tying a rope to a ring, a peg, a pole, another rope, and the like.

Variations can beef up the stability of the Cow Hitch, so it’s worth learning the core pattern—and this is an interesting historical knot, besides.

How to Tie the Cow Hitch

There are two main methods of tying the Cow Hitch: a rope-end and a midline version, the latter used for hitching onto the end of a post, peg, or rope. We’ll cover the endline approach here, then briefly summarize the midline, or loops, variation in a later section.

Bring the running end of your rope under the object.

Make a turn around the object.

Bring the running end under the standing end of the rope.

Now bring the running end over and around the object.

Bring the running end through the loop formed by the second turn.

Pull both rope ends to tighten.

Tips on Tying the Knot

Variations on Tying the Knot

Another useful method for tying the Cow Hitch is via midline loops, which can be done for securing the line to the end of post, peg, rope, or other terminus. Make a loop in the rope, then a second in the same direction. Slide the second loop over the object’s end, then twist the first loop and slot it over as well. Pulling the two standing ends cinches up a Cow Hitch.

There are a number of ways to reinforce the Cow Hitch, including the so-called Bull Hitch or Piwitch Knot that may be constructed either with a rope end or with a bight. Standard Cow Hitches are also often strengthened by adding one or two Half Hitches to finish them off.

Advantages of This Knot

The Cow Hitch is a quick and easy way to rig a line to another object, including another rope. No question it’s a useful knot to learn—just not a super-secure one by its lonesome.

Disadvantages of the Knot

Unless reinforced with Half Hitches or rendered with one of the reinforced variations (such as the Bull Hitch), the Cow Hitch isn’t stable enough to be considered reliable. It can slip under load, and also come apart or shift around when not under strain.

History of the Knot

The Cow Hitch gets its name—surprise, surprise—from its value in tying up livestock. The Ashley Book of Knots spotlights it as a potentially more secure attachment for this purpose than the Clove Hitch, which the book acknowledges was (at the time, anyhow) also widely rigged up for hitching cows and other stock.

Uses For the Cow Hitch

We already covered the old-school value of the Cow Hitch for tying up livestock. It’s also handy in a variety of other settings, as long as its limitations and the construction of enhanced versions are taken into account. Compared with the Clove Hitch, the Cow Hitch is pretty darn similar, but somewhat less likely to jam.

From tying a tool to a lanyard to setting up a shelter with a beefed-up version of the Lark’s Head, the Cow Hitch has plenty of utility in a backcountry emergency—so long as you understand its precariousness as a standalone knot.

The Cow Hitch can be a handy knot for stringing up catches along a main line.

Bowhunters sometimes use the Cow Hitch on their bowstring, and the knot can also be handy for hoisting up gear.

Securing mainlines or guylines, fashioning a lanyard to carry a compass or another tool: One or another version of the Cow Hitch (preferably an enhanced version, for any critical loads) is definitely worth learning for camping purposes, even if it’s not a core-level sort of knot.

The Cow Hitch is often used by arborists to tie slings into pulley blocks. But in these applications the hitch is definitely boosted by one or two Half Hitches to finish things off.

Whether it’s stringing a makeshift clothes line or raising or lowering tools amid a housework project, the Cow Hitch can readily muster up for a variety of around-the-house tasks, so long as (to underscore what we’ve been saying throughout) you’re keeping in mind or circumventing its shortcomings.

Depending on your definitions, the Lanyard Hitch can be considered a separate knot or more or less identical to the Cow Hitch. We’ve already covered how similar the Clove Hitch is to this Lark’s Head knot, and the value of the Bull Hitch or Piwitch Knot as an enhanced variation.

The Timber Hitch or the Running Bowline may be substituted in critical situations—as in tree-climbing work—when a Half Hitch-reinforced Cow Hitch could slip, as when a heavy load is applied perpendicular to the knot.

To Tie a Cow Hitch Knot: 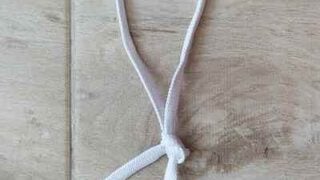 ← Previous
How To Tie The Loop Knot 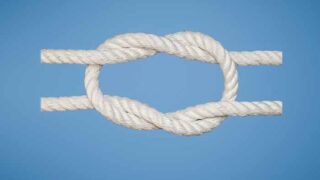