A quality shovel and saw are two of the most important tools for long-term survival, no matter the situation.

Although you can certainly buy a shovel and saw separately, the Schrade Shovel Saw Combo combines these two essential survival tools into a single package.

Not only is this two-in-one shovel/saw surprisingly versatile, but it’s remarkably well-built and relatively lightweight. It comes with a durable sheath to protect the blades during transport.

So, is this the best tool of its kind on the market?

That said, there are much better individual options – for both survival shovels and survival saws – if you don’t mind buying them separately (and spending slightly more).

I’ve had the opportunity to use this Schrade multi-purpose tool enough times in the field to have a great feel for its performance in a wide variety of survival situations.

Here’s what you need to know before adding the Schrade Shovel Saw to your survival kit.

Experienced preppers know that a tactical shovel is one of the most valuable survival tools.

You can use it to build a fire pit, construct a rain trench around your shelter, dig a latrine, shovel a stuck vehicle out of mud or snow, and so much more. You can even use it as a weapon as a last resort.

A lightweight saw is just as essential for long-term survival. You can use it to cut wood for a fire or construct a shelter among many other things.

As its name implies, the Schrade Shovel Saw combines both of these valuable survival tools into a single package.

Unlike many survival saws and survival shovels on the market, this offering from Schrade does away with the popular folding design in favor of a multi-piece handle that quickly and easily screws into either a saw attachment or a shovel attachment.

The first thing I noticed after unboxing the Schrade Shovel Saw is just how solid and rugged it feels in your hands.

Although it’s a bit on the flimsy side, this translates into a well-built tool that will hold up to the wear and tear of regular use.

That said, at just a bit over 2.5 pounds, this shovel/saw combo certainly isn’t heavy. It’s light enough to pack in your rucksack for use while hiking or backpacking.

As far as actual durability in the field goes, this Schrade tool has held up very well so far over the course of several short camping trips. I am, however, still skeptical of how it will perform in the long run (I will update this review accordingly).

In a true survival situation, your life depends on your tools. You can’t have your shovel or saw break in the field. The consequences could very well be dire.

Personally, I much prefer a one-piece tactical shovel, like those used in the military as entrenching tools. I avoid shovels that fold or screw apart. The same goes for a saw.

Although the Schrade Shovel Saw will certainly get the job done for campers and hunters, I’d invest in something slightly more expensive for survival if your budget allows.

Pros and Cons of the Schrade Shovel Saw Combo

The Schrade Shovel Saw is a high-quality survival tool with a lot of benefits – but it does have a few negatives worth noting here.

A few of the things I like most about this survival shovel/saw include:

What I Dislike About the Schrade Shovel Saw

A few of the things I don’t like about this survival shovel/saw include:

Here are the most important features and specs for the Schrade Shovel Saw:

Is the Schrade Shovel Saw Combo Right for You?

I’ve always been a big fan of Schrade, although I haven’t bought any new products from them in the last few years.

The Schrade gear I do already own (mostly knifes) has held up well to a decade of hunting, fishing, camping, and more.

Although I’m a big fan of my current Schrade products, rumor has it there’s been a big decrease in quality of their products over the past several years.

I don’t see this myself – at least in the Schrade Shovel Saw Combo – but it’s certainly something to keep in mind when buying Schrade tools with prepping/survival intentions.

As for the Schrade Shovel Saw, I recommend it to campers, anglers, and hunters looking for a multi-purpose shovel/saw combo that’s strong and well-built.

I really like the multi-piece design of this shovel/saw that eliminates folding pieces (which are famous for breaking). The black oxidized coating on both the shovel and saw is also a nice touch.

In the field, this shovel digs well, although the blade is somewhat small. The saw, on the other hand, is very sharp and strong. I’ve had no problem using it for minor sawing tasks so far.

Also, worth noting are the abundance of extras features/accessories built into this tool. The shovel blade has a built-in ruler, bottle opener, and several hex wrenches. All of these are actually milled into the blade itself. The tool also comes with a compass.

To top it off, the Schrade Shovel Saw comes with a rugged polyester sheath that you can easily attach to your belt or your pack to keep this tool with you at all times.

As mentioned above, I recommend this tool to all campers, hunters, and anglers. It’s perfect for light use when you’re not too far from civilization.

If you’re prepping for a survival scenario, on the other hand, this tool will likely get the job done, although I’d do my research, spend a little more money, and buy a separate tactical shovel and tactical saw that have zero chance of failing in the field.

This is a great quality survival shovel/saw for those on a budget – but there are also far better options available.

Alternatives to the Schrade Shovel Saw

I like this Schrade Shovel Saw Combo much better than most tactical folding shovels on the market.

But nothing beats a one-piece military-style shovel. The best of the best are those found at military surplus stores. Although these are usually heavier than folding shovels, relatively lightweight models, like the Bully Tools Trunk Shovel, are available.

If you’re stuck on the idea of a folding shovel, then I highly recommend a Rothco Folding Shovel for survival. It’s one of the toughest and most durable around – at a very affordable price.

I’d recommend keeping a durable, one-piece shovel in your bug-out vehicle and/or your bug-out shelter. Weight doesn’t matter as much here. Then keep a lightweight shovel (like the Schrade Shovel Saw Combo) in your bug-out bag for short-term use in emergencies.

The same logic is true for saws, although folding saws do work fine. Just as important as a high-quality saw is using your saw correctly for each specific task.

The vast majority of damage to saws is caused by operator error rather than because of a poor product. Most important, perhaps, is only cutting on the pull stroke. Try not to ever cut on the push stroke. This is the most common way folding saws break.

Although I’m very pleased with the saw on the Schrade Shovel Saw Combo, a good alternative folding saw for survival is the Corona Razor Tooth Folding Saw.

I’m very happy with the Schrade Shovel Saw so far.

Although I’ve only used it on a couple of short camping trips, it’s now a fixture in my camping kit. I intend to test it more extensively this coming summer and fall.

I love that this shovel/saw combo has a multi-piece handle rather than a folding design. You can quickly and easily attach either the saw or shovel attachment to the handle. All three of these main components work well and seem very durable.

As I’ve mentioned several times already, this Schrade tool is excellent if you’re on a budget. It’s certainly better than nothing. It will get the job done in an emergency.

Yet, my personal prepping philosophy is to invest in the best quality equipment I can for tools that see as much use as a shovel and a saw. In a long-term survival situation, you absolutely need a shovel and saw that won’t fail, no matter how hard or for how long you use them.

I’m not quite sure this shovel/saw combo meets that criteria, but it’s certainly well-built for camping, hunting, fishing, and other recreational wilderness outings. 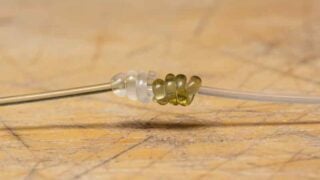 ← Previous
How to Tie a Blood Knot 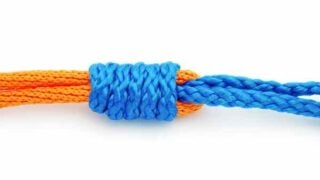 Next →
How To Tie The Albright Knot